Investigators have handed down their final report into the death of a Griffith-based helicopter pilot in a crash near Hay and have called for checks on safety equipment and procedures.

Dan Slennett, aged 34 and originally from Condobolin, suffered fatal injuries on July 31, 2020 when the Robinson R44 Raven helicopter he was piloting sustained significant damage in a crash. 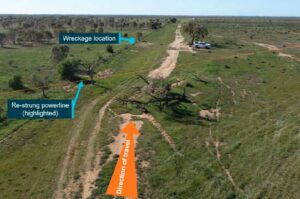 The Australian Transport Safety Bureau (ATSB) released its report on Friday, which found the helicopter hit a single wire power line and then the ground while Mr Slennett was spraying for weeds at a Steam Plains property, between Conargo and Hay.

“The pilot knew the wire existed and overflew a small section of the target area earlier that morning, but did not conduct an aerial inspection to identify hazards and verify the location of the powerline on the accident flight,” the report stated.

“Without the aerial hazard check, the pilot was reliant on seeing the wire during the flight, but was unable to do so in time to avoid the wirestrike.”

As a result of the investigation, the ATSB has issued a safety advisory notice to strongly encourage pilots that work at a low altitude to wear a flight helmet and ensure it is properly maintained, fitted and secured with a chin strap.

Mr Slennett was wearing a helmet during the crash but it was not effective in preventing fatal injuries.

“Either the impact forces exceeded the helmet design specifications, or the helmet was not fitted, worn or maintained correctly,” the ATSB report stated.

The ATSB found that Mr Slennett’s was likely wearing the same helmet when he suffered facial injuries during a crash in 2018 but there was no evidence it had subsequently been inspected or had maintenance.

Mr Slennett was working for Riverina Helicopters at the time of his death, a company that operates out of Griffith Airport.

Riverina Helicopters said it had changed ownership since the crash and was unable to comment.

Investigators were also unable to conclude whether Mr Slennett slipped out of his three-point restraint or was not wearing it, which led to flail injuries during the crash.

The ATSB also found that Mr Slennett had been diagnosed with severe obstructive sleep apnoea in January 2020 but had not adhered to using a CPAP machine most nights to improve his breathing during sleep.

“The pilot was not effectively managing severe obstructive sleep apnoea, which has been shown can cause impairments in cognitive functions including attention and short-term memory, and increased the risk of the pilot suffering the effects of fatigue,” the ATSB report stated.

“It could not be determined whether the pilot was experiencing any impairments associated with the condition.

“The condition had also not been disclosed to the Civil Aviation Safety Authority, which prevented oversight of any ongoing safety risk associated with the condition.”