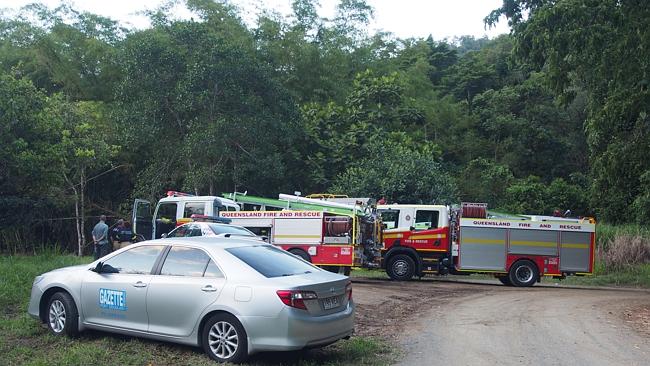 Emergency services crews near the site of a helicopter crash near Mossman. PICTURE: SHANE NICHOLS

FOUR men are lucky to be alive after a helicopter surveying weeds near Mossman “fell out of the sky” and crashed into a creek bed yesterday.

The pilot of the GBR Helicopters chopper was being assessed for spinal injuries last night while the other three occupants walked away virtually unharmed.

The crash happened on a 50ha property on Whyanbeel Rd, near the location of a similar helicopter crash just over four years ago. 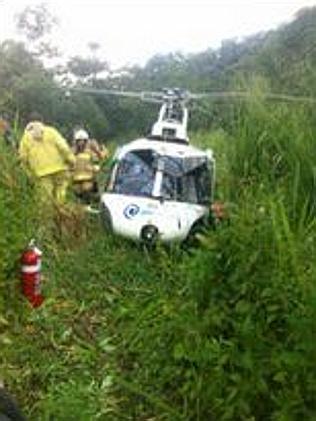 The wreck of a helicopter that crashed near Mossman. PICTURE: SUPPLIED

Emergency services were forced to trek to the scene through dense bushland to reach the site, before the 41-year-old male pilot was flown by rescue chopper to Cairns Hospital in a stable condition.

A Queensland Ambulance Service spokeswoman said the pilot had complained of lower back pain but all four occupants had been able to get out of the helicopter before help arrived.

It is believed the group were Biosecurity Queensland officers surveying the invasive miconia weed, which is a declared pest plant.

Project co-ordinator Mick Jeffery said last week they would be looking for the weed in “dense rainforest areas”.

“Once weeds have been identified, they will be marked using GPS technology,” he said.

High Falls Farm owner Andrew Le Carpentier was visited by State Government employees several days ago, who notified him they would be conducting weed surveys via helicopter in the Whyanbeel Valley this week.

Mr Le Carpentier said he had warned them about a helicopter crash involving crew conducting weed surveys in the valley four years ago.

Four people including government employees, a Cairns Regional Council officer and a pilot were injured after their GBR Bell Ranger 206 helicopter went down near Whyanbeel Rd after striking powerlines on June 1, 2011.

The pilot and one passenger sustained serious injuries, and the other two passengers sustained minor injuries.

Mr Le Carpentier said the powerlines were a hidden danger for low-flying aircraft in the area.

“There’s a big red ball on it to warn the helicopters, but unfortunately what happens is it goes mouldy,’’ he said.

Another resident said the helicopter “fell out of the sky” yesterday, and it appeared there was no contact with powerlines this time.

The Australian Transport Safety Bureau will investigate the incident.