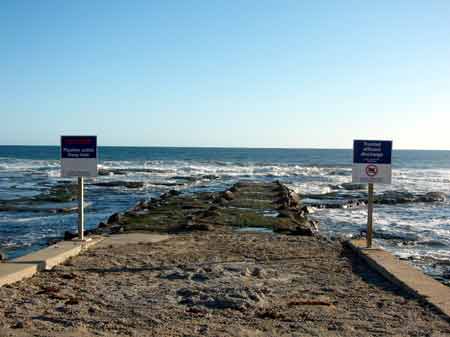 *Melbourne Water dump 1 Billion Litres a day of semi-treated sewage and industrial waste into the ocean and bay.

*In the year 1996/7 Melbourne Water had an operating profit of $173 million for their sewage activities.

*Industrial (trade) waste makes-up 16% of the total sewage load but constitutes 50% of all toxicants and nutrients.

*Land-based disposal of sewage would be made more viable if dangerous poisons were extracted.

*Melbourne Water do not envisage the seperation of industrial waste from the domestic sewage stream.

*The EPA are the body given the job of regulating and monitoring the discharge of pollutants into the environment.

*The Victorian EPA had an operation budget in (1996/7) of $27.5 million compared with their NSW counterparts of $74 million.

*Since the Kennett Government came to power in 1992, the EPA have been forced into a co-operative relationship with polluters.

*The EPA do not have the resources to even check the data from companies licensed to pollute.

*In the same period prosecutions to the public for littering rose from 400 to 2683.

What’s in the lethal brew that is dumped into the ocean and bay?

These pollutants, emanating from sewage trade waste (food processing), detergents and agriculture (fertilisers, herbicides) can lead to toxic algal blooms, pollution of the reef and sea floor habitat, the degradation of fisheries and degraded water quaility.

These are elementary toxins that emanate predominantly from industrial activity (car manufacturing, electroplating, plant manufacturers etc) and also road run-offs. Heavy metals settle and accumulate in sediment on the sea floor and estuaries and are absorbed in the marine eco-system, marine plants and animals (particularly shellfish). Some heavy metals are lethal if ingested by humans eating contaminated seafood. They bio-accumulate* in the flesh and vital organs of animal species.

These contaminants are products of the modern industrial society, many like Dioxins and Dieldrin and DDT are designed specifically to destroy life. They cause genetic damage in plant and animal life forms and remain for long periods in the environment and bio-accumulate* in living beings.

These are micro-organisms that emanate from the gut of mammals and can be transferred into our waterways through sewers. Bacteria can cause serious eye, ear, throat and intestinal infections. Certain strains of streptococci and ecoli can cause lethal diseases such as Meningitis.