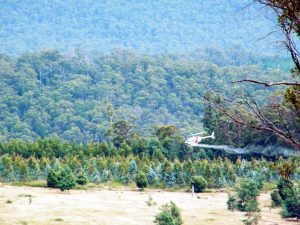 Weegena Tasmania 20th Jan 2009. Spraying Gunns plantations. During this event spray drift filled the river valley causing 5 people who were at a meeting at a house on the river to be affected by the spray. Spray used was Alphacypermethrin with a surfactant called Bond. Physical effects were burning eyes, nausea, headaches and confusion. For the three of us who live in Tasmania the effects lasted for at least 4 days