Local residents have been warned to stay indoors following a chemical spill in Tullamarine, Melbourne.
A truck carrying hazardous pesticides crashed over a freeway embankment and was left hanging, with the driver trapped, at about 2am on Western Ring Road.
The driver has been rescued and taken to hospital, after he was trapped in the mangled cabin for hours.
But the operation is still underway, with pesticide spilled across the road.
An exclusion zone is in place, with people in Tullamarine warned to avoid the area and also to stay indoors.
It’s expected the mop-up operation could take most of the morning.
The truck has still not been removed and the road is closed, with police, fire, ambulance and Rescue Victoria crews on the scene.
Police have said it is an “incredibly delicate” operation.
Drivers this morning are advised to avoid the area, including Caterpillar Road and parts of Melrose Drive.
However, the airport should still be accessible through other routes.
Police were unsure as to the causes of the crash, but an investigation is underway. 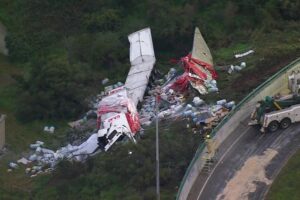